“A Watershed View of Problems and Opportunities for the Russian River”

Two reports on the Russian River late this summer offered two different pictures of our
watershed and most people are focused on only one of them. The first is the Draft
Environmental Impact Report for the “Fish Habitat Flows and Water Rights Project” (Flow
EIR) that concluded we need to reduce summer flows by 44% to improve habitat for
endangered salmon and steelhead. The second document was the Russian River Independent
Science Review Panel Report (IRSP Report) on watershed hydrology and stream ecology, in
other words the science around the movement of water and it’s relationship to wildlife and
fish habitat. It’s the Flow EIR that has everyone talking, but the ISRP Report is far more
comprehensive and focused on the biggest issue in our watershed.
If we had to point to the single biggest problem for the River, it’s the complete disconnection
of our River from its former floodplains from Ukiah to Jenner. For a river not having a
floodplain is like a car with no motor, it just won’t do the job we need it to.
Historically rivers like the Russian River provided valuable “ecosystem services” to the
community that we’ve lost almost entirely. Ecosystem services are services valuable to
people that healthy natural systems provide for free and are worth millions to billions of
dollars. Ecosystem services are things such as food for juvenile salmon, natural flood
protection, groundwater recharge, water purification and climate regulation. Today we know
those ecosystem services have been greatly diminished or lost before the word ecosystem
services was first used.
How did we lose potentially Billions of dollars worth of free natural services? Simple, we cut
the River off from spreading on to its floodplain during the rain season because of
channelization, mining and thousands of dams large and small. These actions have resulted
in the river’s bed down-cutting or incising up to 25 feet in some parts of the Russian River.
The graphic below illustrates this dynamic by showing the riverbed elevation in the 1940’s
and today.

A cross section view of the lowered riverbed and groundwater storage
At the same time as we have dropped the elevation of the bottom of the river, we have
straightened and simplified the river and many tributaries with bulldozers. This river
engineering eliminated the old river meanders, wetlands and about 80% or more of the area
the river used to occupy. The aerial view graphic of the river in 1942 and in 2005 below
shows that the Russian River lost 75% of the former river area, just between Healdsburg and
Wolher Bridge. Put in other terms we have put the Russian River into a strait jacket that is 3
sizes too small and turned the Russian River into a simple ditch with trees on the sides. We
have a car with no motor for a river. 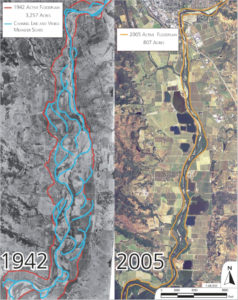 From Healdsburg to Wohler Bridge River occupied 3,257 acres
By 2005 river shrank 75% to 807 acres – no room for floods or fish
Why is a straight deep channel a problem? It certainly provides more land for development
for farming and other land uses. The reality is the loss of river area comes at a steep price –
steeper than the hottest selling pinot now grown where the river used to be. Back in 1942,
when the river rose it spread out and moved pollutants like silt into seasonally flooded areas
where it wouldn’t harm fish or drinking water sources. In 1942 the spreading river would
spread out and slow down and recharge our groundwater. This also provided natural flood
control in slowing down water and spreading it out, today it all goes straight to Guerneville
and increases flood heights rather then be temporarily stored in the floodplains. We know
floodplains grow bigger salmon from studies that show salmon put in 3 foot deep pens in
rice fields (pictured below) grow twice as fast as fish in the Sacramento River, and bigger
juvenile fish lead to more returning spawners that re-build populations. Like any wildlife
population, the biggest regulator for Salmon numbers on the Russian River is how much
food the river makes. When you shrink the river by 75-80% it produces that much less food
and therefore we have less salmon. 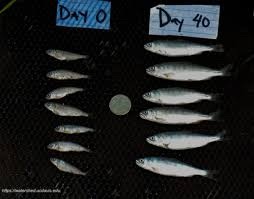 Fish raised in pens in rice fields/ floodplains grew twice as large as fish in River, which
means more returning adults.
All these problems will get far worse with a changing climate. In the simplest terms, the
hotter the air temperatures, the more extreme the weather is on both sides of the coin. When
we have floods, they will be much bigger, and damage will be more costly. When we have
droughts they will be longer and have more dire effects due to hotter temperatures. Water is
a major part in seven out of ten jobs in our watershed so a prolonged ten-year plus drought
would devastate not just our environment, but our economy as well.
It’s obvious to many we have a very big problem so can we fix it? Luckily that answer is yes,
we can get back many of those lost ecosystem services to help us survive more severe
weather. This is why Riverkeeper, after fighting with gravel miners for decades, is now
working with them to restore former gravel pits back to floodplains. We’ve spent
considerable time and effort over the last four years with Hanson Aggregates to come up
with a plan to turn their brownfield pits into floodplains. This is a big deal as land along the
river is very expensive but Hanson is willing to give the restored floodplain area – 350 acres
to Sonoma County Regional Parks for a public park. A UC Davis study shows us that adding
this much area will boost groundwater recharge by more than double. This is a win-win for
the river and the community and increases the size of the middle reach by 30% in one project
and feed up to 100,000 juvenile salmon! Closer to your home so you can help by slowing
down and spreading out water in your garden so it sinks in to groundwater.
The time to act and restore our floodplains is now before the next drought or next flood.
When those bigger storms do hit us, it will be too late to act. What kind of future do we want
in the watershed? A future of tipping from one disaster to another, or should we invest the
time and money now to avoid disasters completely or reduce the impact to manageable
levels?
Russian Riverkeeper is a Healdsburg based not for profit community benefit organization
that depends on your tax deductible contributions for our work. To donate or learn more
about our work, please visit russianriverkeeper.org!

A PDF version of this article can be found at this link: