Riverside Habitat – Channelizing the River & Habitat Loss
Among the world’s ecosystem types floodplains are ranked second only to estuaries in terms of ecosystem services provided to society, with floodwater storage, pollution filtering and biodiversity being the greatest benefits. At the same time, the most threatened habitat zone on earth is riparian floodplains and river corridors according to USEPA and National Marine Fisheries Service reports.

Many people think of rivers as the part with water in it or the area between the channel banks but this misses one of the most critical components of a river – riverside forest and old river channels and oxbows along the banks and floodplain next to streams. This zone of the river, referred to as riparian areas or off-channel habitat, is critical to water quality and wildlife such as birds and fish by providing food sources, shelter and nesting areas. These riparian areas also play a critical role in reducing human impacts from flooding. In the Russian River over 90% of these riparian areas have been lost to development in urban areas, land clearing for farming and channelization of tributary creeks and the main stem of the Russian River. The river width in most areas has shrunk by over 50% in the last 120 years. This loss has reduced historic flood buffers and greatly diminished the rivers ability to sustain wildlife such as of endangered salmon and steelhead. 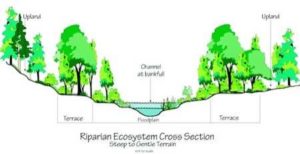 Riverkeeper’s advocacy program is engaged in various projects and regulatory processes with a goal of increasing riparian habitat areas. We are working with several mining firms that own former gravel mines along the river to investigate the restoration potential for these large areas that collectively cover over 1200 acres along the river. Several regulatory programs under the Clean Water Act such as the Agricultural Lands Discharge Program could offer incentives to farms that create larger setbacks from streams to improve riparian areas.

Property owners and residents along creeks and the river can make a big difference by actively managing the health of their riparian areas by removing invasive plants and replacing them with native plants that sustain wildlife.  Click here for a PDF copy of A Guide to Restoring Native Riparian Habitat in the Russian River Watershed, which contains wonderful information on restoring riparian areas in both urban and rural areas.

You can learn more about restoring riparian areas by participating in one of our volunteer restoration projects that is part of our Education Program, where you can get instruction on restoring the native plant community.  Click here for more info on volunteering.

Back to Top of Page