Russian Riverkeeper is happy to have been selected by University of Arizona PhD student Behshad Mohajer to support interdisciplinary research to improve sustainable water management in our watershed. Mohajer was awarded funding to further his graduate studies in Earth System Science for the Anthropocene (ESSA). The initiative, launched earlier this year, is motivated by the understanding that transdisciplinary scholarship embedded in partnerships with real-world practitioners, communities, and publics in meaningful ways is absolutely essential to inform actionable science that advances societal impact and social justice.

This collaborative project between Arizona State University and Russian Riverkeeper builds on the fact that hydrological and social systems are interdependent and evolve together over time. The dynamics of Russian River watershed cannot be understood if the community, the built environment, and hydrology are examined separately. This project aims to understand these dynamics by combining hydrological modeling, interviews with stakeholders, and participatory modeling workshops, said Mohajer.

We look forward to working with Behshad on this research, which is becoming increasingly critical as the climate crisis intensifies.

Socio-hydrological analysis of irrigated agricultural water systems in Northern California Recent extreme drought in the western US. has exacerbated the impacts of water scarcity on agricultural and urban water users in the region. For instance, the Russian River Watershed has been experiencing a looming freshwater crisis due to changes in the inter-basin diversions and pervasive drought. In April 2021, both major reservoirs of the watershed were at their lowest levels and the annual rainfall hit less than 40% of the historic average. Agricultural activities play an important role in the local economy and substantially impact the natural hydrological cycle. This collaborative research with the Russian Riverkeeper Non- Governmental Organization points to severe, potentially destabilizing, declines in the Russian River’s freshwater security. Here, we propose exploratory socio-hydrological modeling to 1) inform water conservation plans in coping with drought, 2) test the aptitude of exploratory modeling in addressing complexity and deep uncertainty in coupled human-water systems, 3) facilitate community involvement in co-creation of knowledge, and 4) contribute to the resilience of the community. Our proposed methods include a diverse range of methods and skills from hydrological and socio-political sciences, complex adaptive systems, and environmental policy. 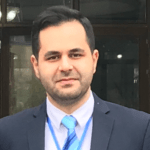 since 2006. Throughout his career, he has been actively exploring potential pathways to implement and advocate for science-based and community centered engineering solutions. Behshad also worked as a staff member of United Nations specialized agencies and funds such as UNESCO and UNICEF from 2017 to 2019. He worked with UNESCO’s International Hydrological Program in the implementation of phase eight of its strategic plan in response to pervasive water scarcity challenges in the middle east and central Asia by working with governments, academia, and NGOs. His research is focused on developing coupled human-water models to derive adaptive water infrastructure management and operation policies in facing deep uncertainties. Since 2019, he has been holding a graduate research associate position as a part of an interdisciplinary project on designing adaptive reservoir operation policies in Northern California, funded by the National Science Foundation. He has been awarded academic scholarship awards and research grants by multiple associations and initiatives at ASU such as the Earth System Science for the Anthropocene initiative.